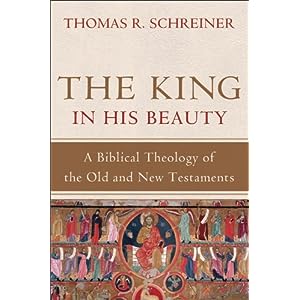 Tom Schreiner’s New Testament Theology was hailed by Simon Gathercole as “a magnificent acheivement.” What shall we say, then, about his new whole Bible theology, bearing the matchless title, The King in His Beauty?

I can say that there’s not a saner, clearer, shrewder, godlier scholar I know. No one humbler or happier, no one whose life better matches what he preaches and teaches. No one whose writings I find more helpful, more convincing, more instructive. As I’ve read Schreiner over the years, I’ve been so often edified. So many times I’ve been impressed by his ability to summarize so much scholarship so succinctly, and so often I’ve seen him solve what seemed to be intractable difficulties with straightforward common sense that accounts for everything in the text. I don’t know anyone who has read more, anyone more charitable in dispute, anyone more willing to learn from those of different perspectives, and I can’t think of anyone that I’ve learned more from than Tom Schreiner.

In fact, I’m having a hard time thinking of a point where he has failed to convince me. And I can be pretty disagreeable!