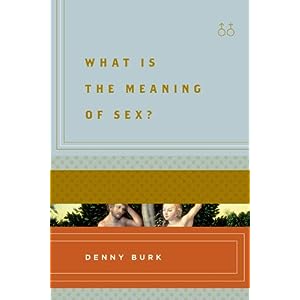 You would have to be hiding under a rock to have failed to notice that controversy swirls about human sexuality. You remember that thing Luther is purported to have said about where the battle rages? Well, in our day, the battle rages on the sexual-morality front. Only fools or cowards would urge that we shrug off or be silent on these questions.

What about focusing on the gospel?

Addressing questions of human sexuality and gender identity does focus on the gospel: God made man male and female that the two should become one flesh, and Paul says this mystery of marriage is about Christ and the church.

What that, maybe you’ve heard people talk about plausibility structures, forces at work in the zeitgeist that make Christianity and the gospel believable or unbelievable. Do people today think that Christianity is unbelievable because of the Bible’s sexual morality? Pretty much.

The fact of controversy is not the only thing that makes What Is the Meaning of Sex? the timeliest book of 2013. Bring to the controversy an author steeped in the Scriptures, who has shown himself to be a careful exegete, who is pastorally and culturally sensitive, who has established himself as a reliable commentator on the events of the day, and who is committed to bringing the teaching of the Bible to bear on the most pressing issues of the day, and you can expect a must read book. I’m reading the first draft of Denny Burk’s book now, and the just-mentioned expectations will not be disappointed.

Go pre-order it. Add it to your reading list for this year. Amazon says it appears October 31, 2013. Plenty of time to get your other reading done so you’ll be ready for this one when it ships. There won’t be a more relevant book published this year, maybe this decade.

If there is to be a great awakening, the evangelists that will be used of the Lord to bring it about will need to be equipped to give reasons for the hope we have (1 Pet 3:15).

We will not be able to duck the questions related to sexual morality.

Denny Burk has served us all by writing this book. We can praise and thank God for him, and we can profit from reading what Denny has written. Get your copy here.