Well, perhaps like me you’re a little hesitant to assert “A. T. Robertson is my homeboy,” because we would not want to communicate any disrespect, and from the stories we’ve heard about the way he would summon students to stand up in class and give recitations of the lesson, we might be a little afraid to provoke a test we might not pass! 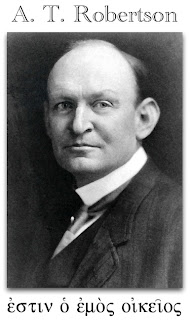 This is a brilliant photo from JT’s post, however, and I think that A. T. Robertson would be glad to have all of us who are committed to the diligent study of the Greek New Testament for the good of God’s people and the glory of Christ say, “A. T. Robertson is my homeboy.”

Here’s what he wrote in the preface to the third edition of the most important book Broadman and Holman sells, A Grammar of the Greek New Testament in the Light of Historical Research (you can get the PDF free online, and it comes with BibleWorks, but there is great value in having a print copy you can mark up as you go through it):

“It is gratifying to know that ministers are using it in their studies as one of the regular tools in the shop. In the classroom only selected portions can be covered, but the preacher can use it every day (as many do) in his reading and study of the Greek New Testament. There are many ministers who read the Greek New Testament through once a year, some of it every day, besides the solid, critical study of a Gospel or Epistle with commentary, lexicon and grammar. This is the work that pays one a hundredfold in his preaching” (xvii).

Amen! And may many so give themselves to the assiduous study of the Greek New Testament that they find themselves making daily recourse to Robertson’s grammar. If you do that, my friend, A. T. Robertson will indeed be your homeboy.

Robertson’s prefaces to this grammar are rich with his humility, his love for the Lord, and his recognition of the immensity of the task he attempted.

Thanks to Rod Decker, you can now access Robertson’s inaugural address here at Southern Seminary. JT has some choice quotes from it.