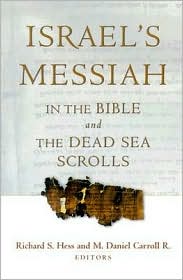 This volume is a collection of essays edited by two OT profs at Denver Seminary. The essays were presented at the second annual biblical studies conference hosted by the Denver Institute for Contextualized Biblical Studies of Denver Seminary in February of 2001. The book’s title describes its first three parts: Part 1, The Messiah in the OT; Part 2, The Messiah in the Dead Sea Scrolls; and Part 3, The Messiah in the NT. Part four reflects the name of the institute that hosted the conference: The Messiah in Latin American Theology. Each part consists of an essay and a response, but Part 1 has two responses. In my judgment the organizers and editors have rightly recognized that the question of the Messiah in the OT is far and away the most contentious and interesting issue dealt with in the volume, thus it is placed first and given two respondents. This review will reflect these priorities, giving more space to Part 1 and briefly summarizing the others.

Daniel I. Block’s massively documented study on the Messiah in the OT argues that ancient Israelites would not have understood the Messiah in either prophetic or priestly terms. In his argument against a prophetic aspect of OT messianic expectation, Block makes every effort to fit the citation of Deut 18:15 in Acts 3:22–23 and 7:37–38 into his view (28–31). Perhaps recognizing the implausibility of what he has argued, Block concludes with the question, “Even if Peter and/or Stephen viewed Jesus as a messianic prophet ‘like Moses,’ are we thereby authorized to read their use of Deut. 18:15 back into the original context?” (31). Block’s implied answer is clearly “No” (as Carroll notes in his response, p. 75).

The first respondent to Block, J. Daniel Hays of Ouachita Baptist University, asks why Block assumes that what the ancient Israelites understood is equivalent to what the OT authors intended (59). Hays also gently suggests that Block has committed a word study fallacy by equating the concept of the Messiah with the use of the term mashiach in the OT, when it is clear that the concept is much broader than the mere use of the word (59 n. 1). Hays offers thorough-going critiques of, among other things, Block’s readings of Deut 18 in Acts 3 and 7 (61–62). He argues that “David blurs the image of priest and king together, as did many kings in the region” (67), and, while making kind remarks about Block and his paper, concludes that the OT “does portray the coming messianic figure as prophet, priest, and king” (69).

The second response to Block is provided by M. Daniel Carroll R. Carroll points to three positive contributions Block makes, then faults him for too narrowly defining what is messianic in the OT (72–76) and for prioritizing some data to the exclusion of other information (77–78). The most helpful comment for understanding Block’s approach comes from Hays:

In Part 2, Craig Evans (Acadia Divinity College, Nova Scotia) surveys Messianism in the Dead Sea Scrolls. He concludes that the community’s hopes for eschatological restoration presupposed messianic expectation; that Qumran’s Messianism matches Jewish Messianism of late antiquity and was important; and that the Messianism witnessed in the Qumran scrolls is helpful for understanding what we see in the Gospels. Richard S. Hess develops what Evans presents (rather than responding/challenging) by offering brief considerations on the term “messiah” and by reviewing some “recent theories regarding the figure of the messiah” in the DSS (104).

Craig Blomberg limits his investigation of the Messiah in the NT to an argument that “There is no unambiguous evidence to demonstrate that ‘Christ’ in any of its 531 New Testament uses ever ‘degenerated’ into a mere second name for Jesus” (141, italics his). In other words, just as “President” is not President Lincoln’s first name, Christ is not Jesus’ last name. This conclusion is based squarely on a thorough consideration of the evidence, including 18 separate arguments that Paul means something more like “Messiah Jesus” or “Jesus, the Messiah,” than he does “Jesus Christ” with Christ amounting to little more than “Smith” or “Jones.” Blomberg’s colleague at Denver Seminary, William W. Klein responds with cautious agreement and suggestions that the methodology could be tightened and the conclusion could be softened.

Gerardo A. Alfaro González, who teaches at Central American Theological Seminary, offers a proposal and assessment from Latin America. Karen H. Jobes (Westmont College) concludes the volume with reflections on Jesus as Liberator.

This book is significant because the Messiah is one of the Bible’s most central themes (some say the central). The exchange between Block, Hays, and Carroll raises the issue of how the OT is to be interpreted among evangelical Christians. Block represents the older insistence on interpreting the OT without regard to the NT—even among those who think that the NT is inerrant. Block is perhaps the preeminent representative of this school, and his paper is astonishingly good according to the standards of this approach. Hopefully this way of reading the OT will be replaced by the likes of Hays and Carroll, who build on the strengths of the older approach by interpreting the OT in its historical context, but who also read it as a messianic document, written from a messianic perspective, to sustain a messianic hope. Understanding the OT as a collection of messianic documents (rather than a random collection of the national lit. of ancient Israel) explains the Messianism of the inter-testament lit. and allows for the possibility that Jesus and his apostles read and cited the OT according to its intended meaning. If this is how we view their use of the OT, we can use their methods as a model for our own interpretation of it as we preach and teach the OT in our contemporary Christian context. Block expresses a wish that the apostles would have preserved what Jesus said on the road to Emmaus. I think that Hays and Carroll would agree with Earle Ellis that they have, in fact, done just that in the NT’s use of the OT. That to say, the authors of the NT learned to read the OT from the teaching of Jesus.