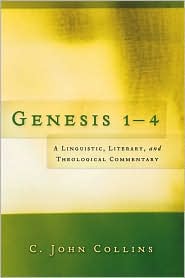 Passionate discussion is once again taking place in the evangelical academy regarding the nature of Scripture and what is meant by inerrancy. Much of this discussion has been generated by Peter Enns’ book Inspiration and Incarnation and Greg Beale’s rigorous interaction with some of Enns’s troubling claims. A good portion of the disagreement centers on the extent to which the OT reflects ancient Near Eastern assumptions and how the world picture the Bible generates should be conceived given what modern science tells us about the universe. John Collins did not intend to engage the Enns-Beale debate, but his book is nevertheless a timely contribution to the discussion.

Collins is uniquely suited to write this volume, having a background in science with an S.M. from MIT. Now a professor of Old Testament at Covenant Seminary in St. Louis, Collins addresses linguistic, literary, historical, and scientific questions in this thorough study of Genesis 1–4. Collins’ first two chapters set out his methodology and rationale, aiming at “ancient literary competence.” The reader is introduced to “A Discourse-Oriented Literary Approach,” which is how Collins describes the method he employs in analyzing the text as well as the criteria he uses to evaluate interpretative options.

Having set forth his methodology, Collins first takes up Genesis 1–4 in its literary context, then discusses the creation week (Gen 1:1–2:3), the garden of Eden (2:4–25), the fall (3:1–24), and what takes place after Eden (4:1–26). This section of the book is a commentary on the text—not arguing a thesis but discussing the text according to the methodology Collins set forth. Interspersed into these discussions are extra notes on many points of interest, such as the nature of death in Genesis 2:17, the location of Eden, and whether Genesis 3:15 is a protoevangelium (Collins says yes). Collins also helpfully traces reverberations of these texts through the Old Testament and into the New. Having thoroughly discussed Genesis 1–4, Collins turns to the question of the sources for this material, its unity, and who wrote it. He concludes that literary and historical features of the text comport best with the conclusion that whatever sources may have been employed, Genesis 1–11 is a unified composition that fits best with the ancient claim of Mosaic authorship.

Collins then argues in chapter 9 that the communicative purpose of Genesis 1–4 is to set forth the worldview that undergirds the religion of the Pentateuch (244). Chapter 10 takes up historical and scientific issues, and it is here that Collins’ work contributes to the Enns-Beale discussion. Collins writes, “the worldview is intended to be normative, while the world picture need not be; by this distinction I, as a modern who accepts contemporary cosmology as part of my world picture, can share a worldview with some ancient whose world picture involved a stationary earth with an orbiting sun” (262). At the same time, Collins emphasizes the importance of understanding phenomenological language and suggests that the world picture described in the Bible might not be as different from our own as some, such as Peter Enns and Paul Seely, suggest. Collins argues against the view that “the water under the earth” (Exod 20:4) refers to a subterranean ocean (264), and he asserts, “There is no evidence that the ‘expanse’ . . . must be describing a solid canopy as a physical entity; it is enough to take it as if the sky were such” (264, emphasis his). For Collins, “it may well be that some biblical statements reflect a world picture that we cannot share—say, on the size of the earth, or that the moon is a lamp rather than a reflector. But this does not mean that the world picture is part of the message being communicated” (265). These considerations are significant contributions to the ongoing discussion of the relationship between the inerrancy of the Bible and modern science.

This book is a solid contribution to our understanding of Genesis 1–4, and those wrestling with the relationship between science and the Bible will benefit from what Collins says in this and other volumes. The reader of this volume will be spurred to greater rigor in interpretive method, as Collins carefully articulates the Discourse-Oriented Literary Approach he pursues. Meanwhile, those who are attentive to the conclusions Collins draws will also see that he appreciates more traditional exegesis. Hopefully books like this one can lead us to understand how to appropriate and utilize the strengths of both newer (discourse analysis) and older (traditional exegesis) hermeneutical practices. The importance of the subject matter, the quality of Collins’ work, and the timeliness of this contribution make this a valuable volume for which we express our gratitude to its author.