Reinventing Jesus: What The Da Vinci Code and other Novel Speculations Don’t Tell You, by J. Ed Komoszewski, M. James Sawyer, and Daniel B. Wallace. Kregel, 2006. 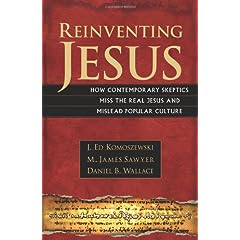 The subtitle of this volume might lead one to think it is mainly concerned with The Da Vinci Code, but that is not the case at all. The learned authors of this volume deconstruct the crazy things said about Jesus by pulling back the curtain on New Testament scholarship. This book is a robust introduction to a number of scholarly discussions. Targeted at the non-specialist, this is a straight arrow with full feathers and a biting tip.

The book has five parts. Part one is an up-to-date introduction to scholarship on the Gospels. It presents what most scholars think about how and when the Gospels were written, why they look alike and yet have differences, and how the authenticity of what the Gospels record can be tested. Part two lays out New Testament textual criticism. As the likes of Bart Ehrman allege “orthodox corruption” of Scripture, readers will be well served by the authors of Reinventing Jesus. This expert presentation of text criticism will help everyone from the layman who wants to understand the footnotes in his English translation to the seminary student coming at text criticism for the first time to the pastor who needs a quick reminder of what he forgot from his days in seminary. Part three discusses the issue of the New Testament Canon. Ever wondered why the Gospel according to Matthew is in the New Testament and the Gospel of Judas isn’t? Here is a fine discussion of the issues. Part four takes up the divinity of Jesus, and part five considers the proposals that the ideas in the New Testament were actually adapted from ideas in other ancient systems of belief.

This is a wide ranging book that sounds the note that those who believe the Bible have nothing to fear from the extravagant claims of unbelieving scholars. If you find yourself needing an answer to the claims of the critics (or if you know someone taking a New Testament course in college), this is the book for you. Buy it. Read it. Give it away. It is up to the challenges of our day, but—and this statement is not meant to detract at all from the value of Reinventing Jesus—never forget that the most powerful way to find the message of the Gospels authenticated is to read the Gospels themselves and taste the sweet honey of the word of God.