The best argument for the single elder view is based on the nature of the churches described in the NT. This view holds that, for instance, in Acts 20:17 when Paul summons the elders of the church in Ephesus, what Luke has in view is not a single church in Ephesus that has a plurality of elders but a multitude of house churches, each of which has one elder. In summoning the elders of Ephesus, Paul is summoning all the pastors of these various house churches. This way of understanding the churches in the NT is then used as a grid through which all of the texts referring to multiple elders are read.

In Acts 14:23 we read that as Paul and Barnabas made their way back to Antioch in Syria from their first missionary journey, "they appointed for them elders according to church." I have rendered this very literally to bring out the sense of the text, which is that each church (sg.) had elders (pl.). This is usually translated, "they appointed elders for them in every church," which makes the same point. Luke does not say that they appointed elders in every town, which would support the single-elder position. He says that in each church (sg.) elders (pl.) were appointed.

In James 5:14 we read, "If someone is sick among you, let him call the elders of the church and let them pray over him, anointing him with oil in the name of the Lord." I find it highly unlikely that a sick member of a certain church should summon pastors from different churches in his city. It seems far more plausible that James envisions a particular church having multiple elders who gather to pray over the sick in their own congregation.

On the SWBTS Oxford Study Tour we found some evidence that early English Baptists read the New Testament to indicate that churches should have multiple elders. In Tewksbury we visited the oldest surviving Baptist church structure in England. Baptists began meeting in this little chapel sometime around 1620. While there, we found this old picture: 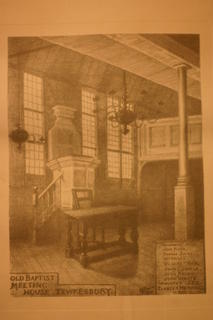 You will notice a little box in the bottom right of the picture, and a close up of that box looks like this: 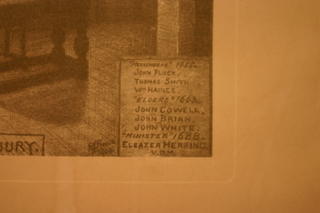 Here is the text from this box:

I don’t know what the first title, "Messengers" refers to. It could be that the three men named were "apostles," since "messenger" is a valid translation of the word "apostle" (apostle is simply a transliteration of its Greek equivalent). Or it could be that these men were "messengers" to associational meetings in the way that current churches send "messengers" to state and national conventions. I take it that the second title, "Elders," refers to men who served as pastors and teachers. The last title in the list, "Minister," could refer to a Deacon—since "minister" is a valid translation of the Greek word for "deacon" (like "apostle," "deacon" is simply a transliteration of the Greek word for "deacon," which means "servant/minister"). It is more likely, however, that "Minister" here is used in the sense of "Pastor," since under the man’s name is the abbreviation "V.D.M.," which stands for Verbi Domini Minister, which means "Minister of the Word of God." If "minister" here means "pastor," then this photo may indicate that in 1663 the church had a plurality of elders, and then in 1688 they had a "single elder" model with one pastor whom they referred to as "minister."

We also visited Bedford, where John Bunyan pastored. In the museum at his church they have a copy of the minutes of the church from when Bunyan was pastor, and the book is open to a page with his signature. He has signed the minute-book after a paragraph detailing an instance when the church disciplined(!) one of its members. Under Bunyan’s name is a list of other men’s names. The tour guide said that those names were the names of the other elders of the church.

Here is a photo of that page: 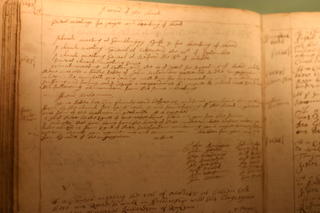 These historical examples only prove that in Baptist history Baptist churches have been led by multiple elders, even when one of them is as prominent as John Bunyan. The real issue for us as Baptists is what the Bible says, and as noted above and argued here, I think that the most biblical way for Baptists to do church is to have a plurality of elders.